It is rare that an opportunity arises in Jersey to create a new pillar of the economy that will change not only the fortunes of Islanders but also their health.

The last time a transformational economic opportunity came Jersey’s way was just over 50 years ago, when a number of visionary island leaders and their advisers saw the opportunity in financial services. Today the finance industry employs over 12,000 people and is responsible for 42% of Jersey’s effective GDP, worth some £1.5 billion each year.

The public consultation process has started for Jersey's Future Hospital. Four sites were suggested but in reality there were only two contenders. The site at Overdale is poorly located for a single site hospital, and rebuilding on the site of the existing General Hospital is the most costly, most disruptive and least favoured option. That left the People's Park (most favoured by government, least favoured by the people) and the Waterfront (most favoured by the people) until the People’s Park was pulled last week.

Alongside the physical construction of a new hospital, the Island has started to develop itself as a centre for digital health innovation, testing and funding. Digital health is one of the fastest growing industries in the world and the government organisation Digital Jersey has identified it as one of the key areas for development in Jersey in 2016. With our highly connected population, close relationships between primary and secondary medical care, high speed physical and wireless links and a nice round number of 100,000 population, the Island is attracting attention as a digital health centre of excellence. Over the last three years the MedTech.je group has had success developing health products on Island that are selling abroad. New technology start ups are starting to pay attention and make contact, and our digital health research programme has been really successful thanks to grants from trusts and individuals.

In addition to digital health developments, there is recognition that Jersey is an ideal place for both undergraduate and postgraduate education. The University of Jersey project is currently running via the Jersey International Centre for Advanced Studies (JICAS www.jicas.ac.uk) and the group are looking to develop niche areas of education that work perfectly on Island, such as biodiversity and marine biology. There is a worldwide shortage of medical school places and three universities have contacted JICAS to explore the possibility of developing a stand alone medical school in Jersey. By creating a medical school on Island, the academic reputation of the hospital would then enhance the recruitment and retention of high quality staff and enhance the testing and development of digital health products. 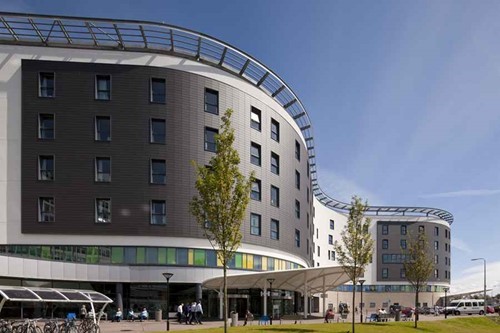 So, combine the new hospital, a medical school and digital health technologies, and you have University Hospital Jersey. A new hospital placed in an iconic building, ideally located at a prime site that is visible to patients, students, families and visitors as they arrive in the capital. The hospital could become a showcase for ultra-modern, innovative medical technologies. Specialist medical and surgical procedures such as bariatric (weight loss) surgery and plastic / cosmetic surgery could be offered on Island, developing new incomes from health tourism. The hospital would train its own doctors and nurses, reducing the reliance on English deaneries to fill our doctor positions and allowing Jersey to free itself from the politics of the NHS (e.g. recent junior doctor strikes). Quality of health care delivery in Jersey would increase and reliance on expensive overseas treatments would reduce. Students could be attracted from outside the EU, enhancing Jersey's global high quality reputation. With each student would come family and friends as new visitors to the Island and thereby, new incomes to the Island.

So how do we move forward? The Island needs to ask itself whether it wishes to continue to rely on the finance sector to maintain the population's quality of life and low taxation, or whether it is willing to take some risk and build an iconic University Hospital Jersey at the Waterfront that will not only enhance Islanders' quality of life but also their quantity of life. Please engage with the future hospital consultation process and help create something special that will change our lives forever.

Note: The image above is illustrative and is not intended to portray the actual design of a new hospital for Jersey.